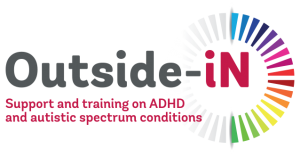 A variety of tools for a spectrum of needs

Who we areWhat we do

Outside-iN is a community interest company dedicated to supporting and educating families, adults and professionals living with or working with Attention Deficit Hyperactivity Disorder (ADHD), Autistic Spectrum Conditions (ASC) and associated conditions.  ADHD and ASC are complex, often hidden, spectrum conditions. Our specialist team of professionals are unique in that they all have first-hand knowledge through living with, or being closely related to, someone with ADHD and/or ASC.

In order for young people to thrive and reach their full potential, it is important that parent/carers are equipped to become their child’s most knowledgeable expert and advocate.

Outside-iN‘s vision is to live in a society without prejudice where individuals with ADHD and ASC and their families are understood and supported; where their voices are heard, respected, listened to and valued, and where difference is celebrated not feared.

What we can do for you 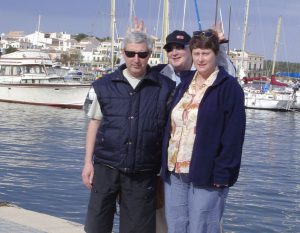 Christmas at Outside-In was tinged with great sadness when we learned of the death of Martin Hill on December 27th 2019, at the age of 31 years. Martin was diagnosed with ADHD as a child and he, and his parents, fought many hard battles to get him the support that was needed to help manage his condition.

His mum, Paula was a keen supporter of our organisation when we started in 2009, and has remained a good friend. Paula, and her husband Lawrence, asked that all donations at Martin’s funeral came to Outside-In and that kind gesture has helped us continue our work through these challenging weeks and months.

Our thoughts remain with Martin’s family and friends at this difficult time, and in his memory we are proud to publish this tribute, written by Paula.

We never thought we would be writing about our Son Martin’s passing from our world, but sadly it is a fact we have to come to terms with. Martin is our middle Son, brother to Matthew and Michael. Martin was born a month prematurely and as parents, we very quickly, noticed differences in his development.

For us, he was a little whirl wind, his world was to be explored and learnt about, but in his unique way. This little whirlwind, as he entered the educational system suffered extensively from poor schooling practices, lack of understanding of school staff, LEA obstruction and lack of NHS support. This is why we became involved with Outside-In, at this time of his life.

Martin was finally diagnosed and after several legal battles attended an understanding, competent and inclusive school in Scotland. Although not a panacea, it enabled Martin to flourish and gain the qualifications that our world requires.

Although his life has come to an abrupt end, we know these battles for our children still persist and the schooling education system still does not include, but seeks to exclude, many of those who have some level of difference.

We hope our donations, in Martin’s memory, to Outside-In will be of help to other children and parents who may find themselves in circumstances where they need extra input/support. We thank, so much, for all those who helped us understand our Son and gave us the ability to support Martin to the best of our ability.

We are committed to providing the right intervention to families, we believe that the best outcomes for those with ADHD and/or ASC are achieved when parents, professionals and young people work together to fully understand the perspective of the person with the condition.

Get in touch now

Our friendly team look forward to hearing from you. We treat every conversation in the strictest of confidence.

So get in touch with us now.